Setting up two different sorts of white fabric in a clothesline formation such that the plastic generates a mild static charge against the poplin. Both textiles are semi translucent against the light.

Experiment with letting the fabric rest against the plastic. The Cloth has been stored in a travel case for some weeks, and such has random folds and creases throughout. The plastic has been kept on a long roll, which adds to the static charge, and allows the plastic to cling and adhere to these folds and creases creating an interesting cross-hatch effect in the ‘natural’ grain of the plastic roll:

Experiment with the fabric pulled slightly back. The light is from a single shaft of sunbeam falling through the window diffused once through the fabric and then falling on the white plastic from behind:

Beam of sunlight, creating different effects through the fabric.  This effect is shot in slow-motion, to allow more focus on the subtle variations as the plastic settles against the cloth.

Testing this effect with the iphone camera, at different apertures.

Movement test- allowing the body’s movement to create a ripple in the formation:

Accidental Shark Formation, inspired memories of the previous exercise using Processing, where the particular shades of the coloured triangles emulated a sharks fin, with variations/ 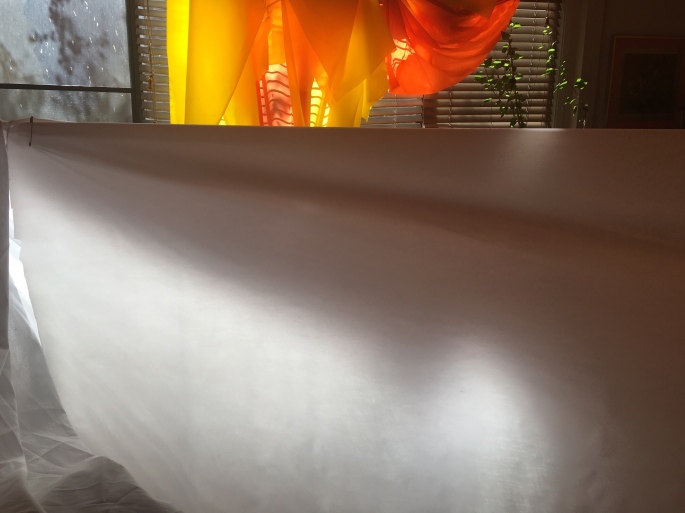 Limited Edition Prints from my photography research will be made available each month. If you would like to browse the online catalogue please subscribe below with a one-time donation to support my ongoing research. If you go on to select a print this payment will be deducted from any future purchases.